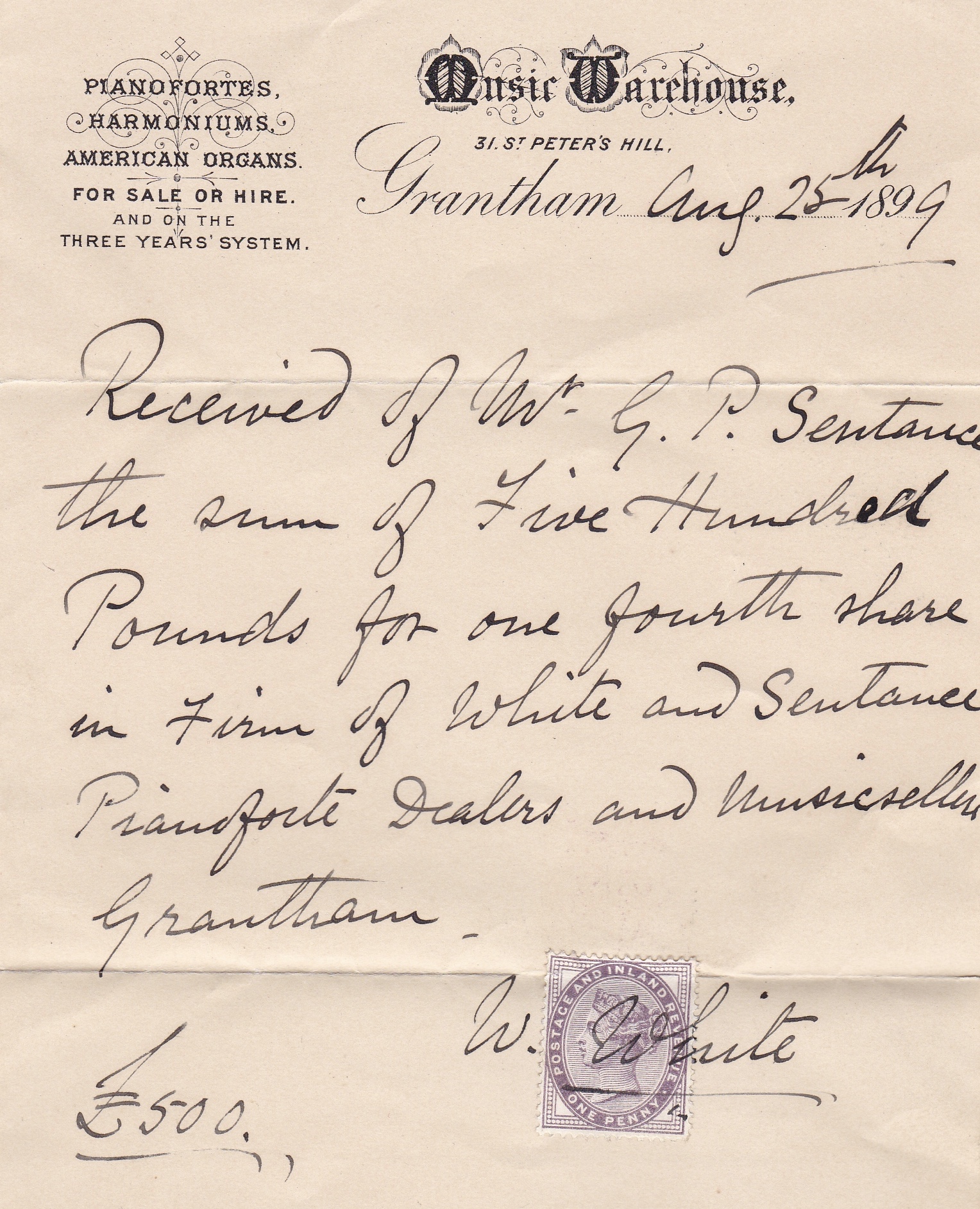 The business was founded in Grantham in 1867 by William White. George Sentance, who had trained with a major London piano factory, became a partner in the 1890's and the business grew steadily to include shops in Melton Mowbray, Peterborough and Sleaford, and an Organ Works manufacturing pipe organs in addition to the piano showroom in Grantham. By the 1920's the firm was serving musicians throughout a large part of the East Midlands, covering Lincolnshire, Rutland, and parts of Leicestershire and Cambridgeshire.Â
Â
This situation continued until the 1950's, but then as family members retired with no heirs to succeed them, the Peterborough and Melton branches closed, followed in 1985 by the Grantham shop. This left George's youngest nephew, Geoffrey Sentance, running the Sleaford business, by then specialising entirely in piano sales and maintenance.Â
Â
In 1987, 120 years after the firm was founded, Chris Winter joined Geoffrey as a partner after training with him for many years. He took over in 1996, when expansion to larger premises in the Victorian former Baptist Church allowed the firm once again to offer one of the largest selections of new and used pianos in the region. With Chris's son Luke now also working full-time in the business, the tradition of passing knowledge and skills from craftsman to apprentice continues, and the future of the firm looks assured for many years to come.Â 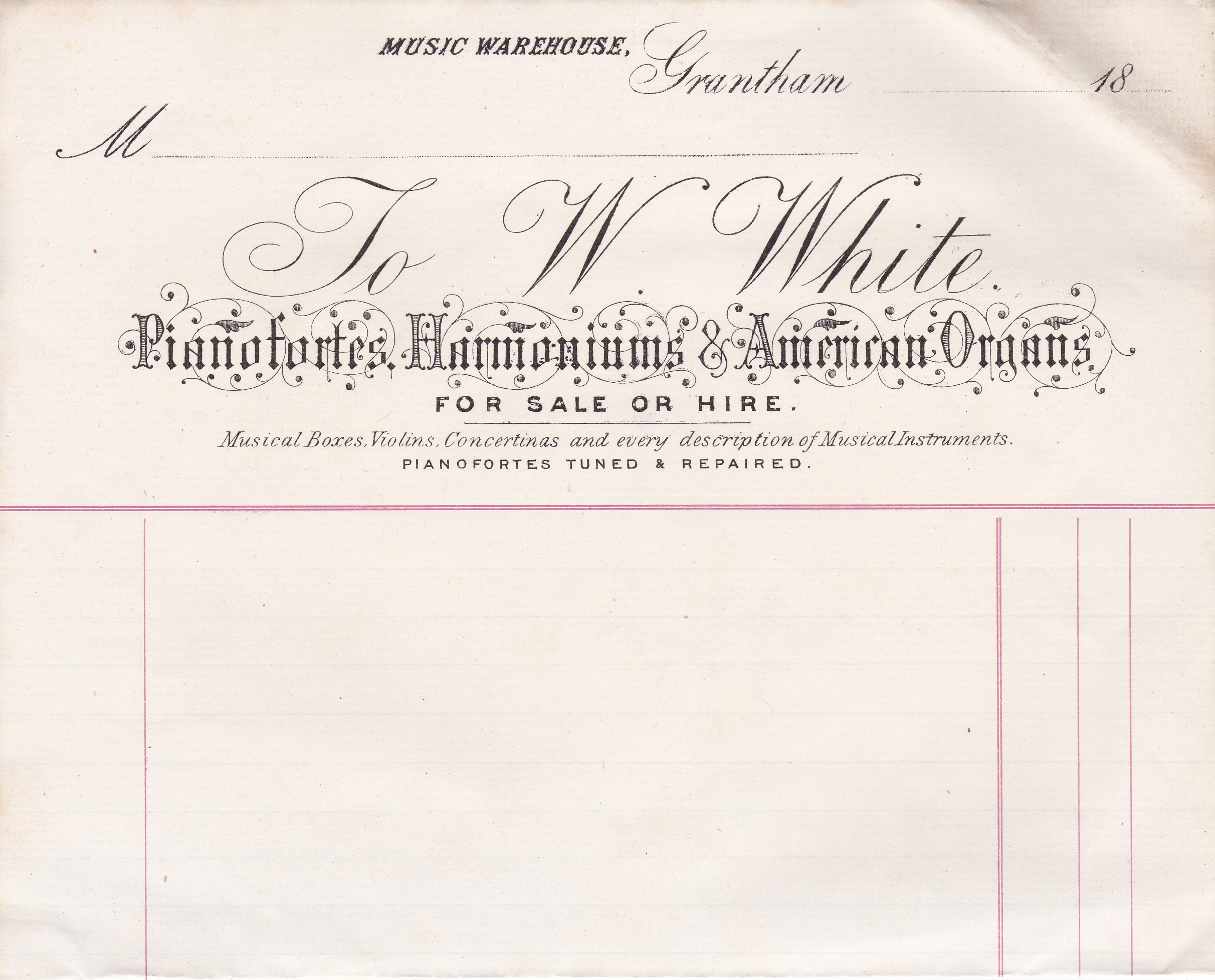 1867 William White started the business at 31 St Peters Hill Grantham as a â€œPianoforte and Harmonium Warehouseâ€.

1897 George Sentance joined White as an employee. He had been apprenticed in the piano trade to the well respected piano maker Kirkmann of London.

1899 25th August. Sentance became a partner, buying a quarter share in the business for Â£500.

1900 11th September. The second branch opened when a lease was taken on a shop at 15 Nottingham Street, Melton Mowbray. Annual rent Â£30.

c1901/2 White emigrated to South Africa on medical advice to move to a warmer climate. He opened a music shop in Jeppe Street, Johannesburg. The partnership continued for a few more years with George Sentance now running the business. 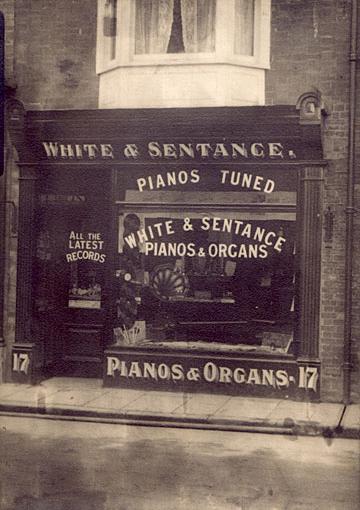 1902-1917 George Sentance had an interest in pipe organs, and for a number of years the firm had an Organ Works in Bath Street, Grantham. A Lancashire man named Harry Tingey was made foreman in 1903. About 20 instruments were built from the ground up, mostly single manual but with some 2 manual specifications. Manufacturing ended when the pipe-maker was called up for WW1, but the organ tuning round continued into the 1930â€™s including quite a large connection near the Welsh borders, where there was a family connection through Georgeâ€™s wife. A number of the organs still survive, including in Digby and Dalby churches in Lincolnshire.

1905 Alfred Sentance, Georgeâ€™s brother, joined the firm as a tuner after training in a London piano factory.

1905/6 Another brother, Bates Sentance, a veteran of the Boer War, joined the firm and learned the trade with George.

1907 1st January. The partnership between White and Sentance was dissolved, with Sentance buying Whiteâ€™s 3/4 share for Â£2087, which included all stock but excluding the premises. Sentance continued to act as Whiteâ€™s agent for some years, buying pianos and shipping them to Johannesburg. 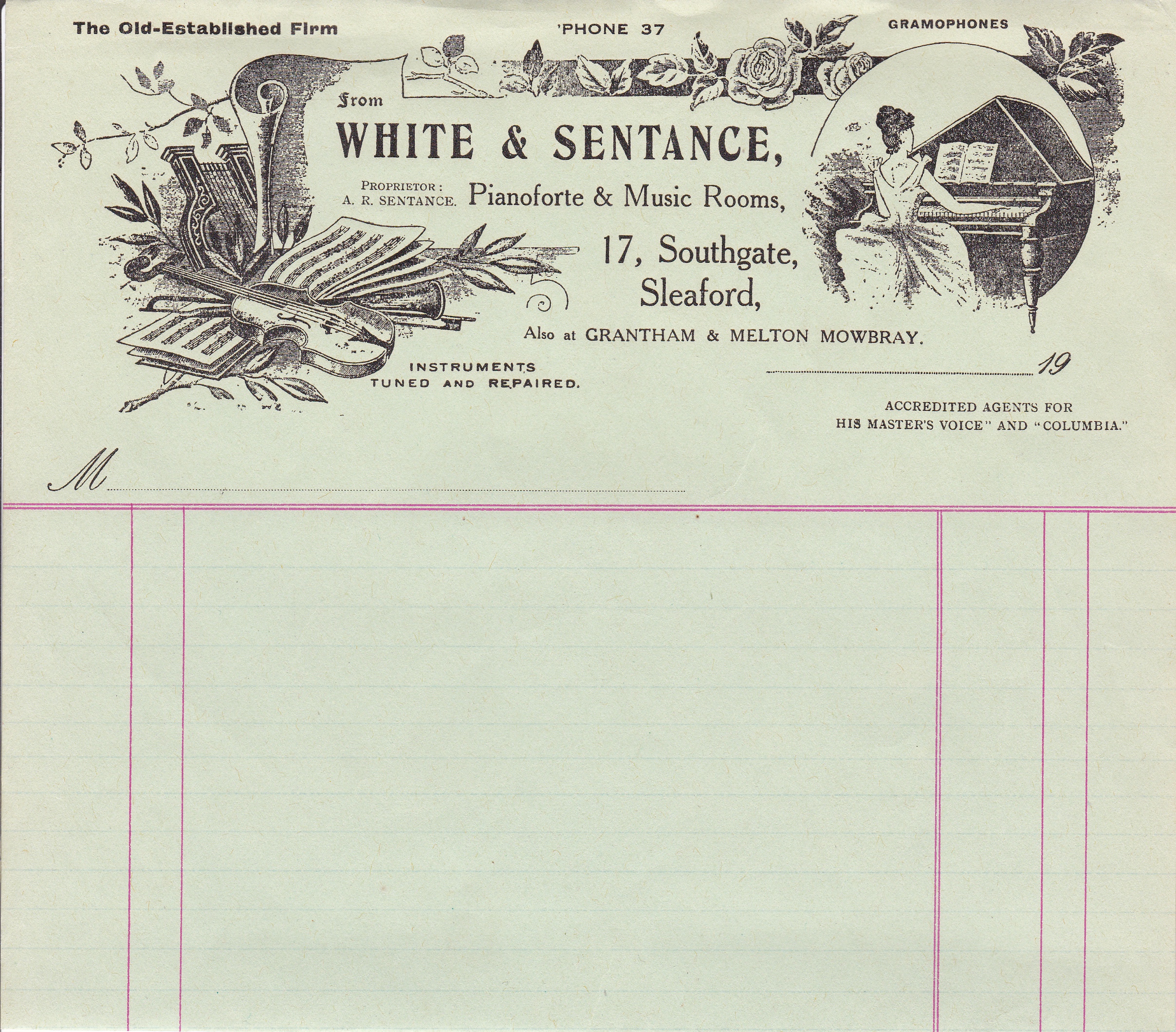 1907 26th November. The third branch opened when George Sentance bought the music business of the late Mr Limming, 38 Boston Road, Sleaford, from his widow Emma for Â£175. (Limming also had a music shop in Boston.) Bates Sentance became manager until he emigrated to Australia in 1912. There, he worked as a tuner for Palings of Sydney.

1912 6th April. A lease was taken on 17 Southgate Sleaford @ Â£45 per annum, and the branch moved there from Boston Road.

1919 After being discharged from the army after WW1 Alfred Sentance bought the Sleaford business from his brother George. From then on the Sleaford shop became a separate business to the other branches, but close cooperation remained between the brothers.

c1920 An advert indicates a further W&S shop in Peterborough. We have no other reference to this branch. 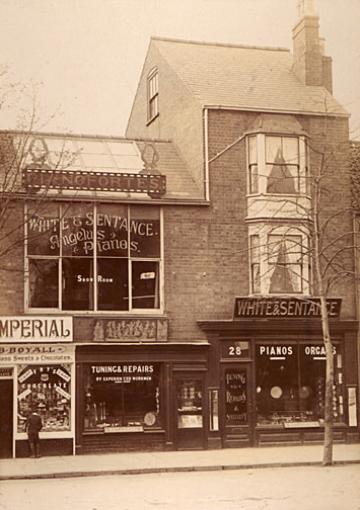 c1923 All branches were among the first in the country to become agents for HMV records.

1925 5th August. George Sentance took his 2 sons, Ernest and Guy into partnership. Over the following years Ernest would run the piano tuning and restoration side of the business while Guy concentrated on records, radio and later television sales and rental.

c1930-1939 The Grantham branch hired public address systems for events, a spin-off from the radio business. A 1937 photo exists of 2 W&S vans with roof speakers at the Syston Park Speed Trials near Grantham.

1934 17th December. The music business of John Letts, 3 Wharf Road, Grantham was bought out of liquidation. This became a second W&S shop in the town, with pianos, other instruments and sheet music sold from Wharf Road, while St Peters Hill concentrated on records, gramophones, radio and later television.

1936 A new shop front was installed at St Peters Hill by local builders Brown and Webb, Union Street, Grantham, making a single frontage over numbers 27 and 28, at a cost of Â£130. 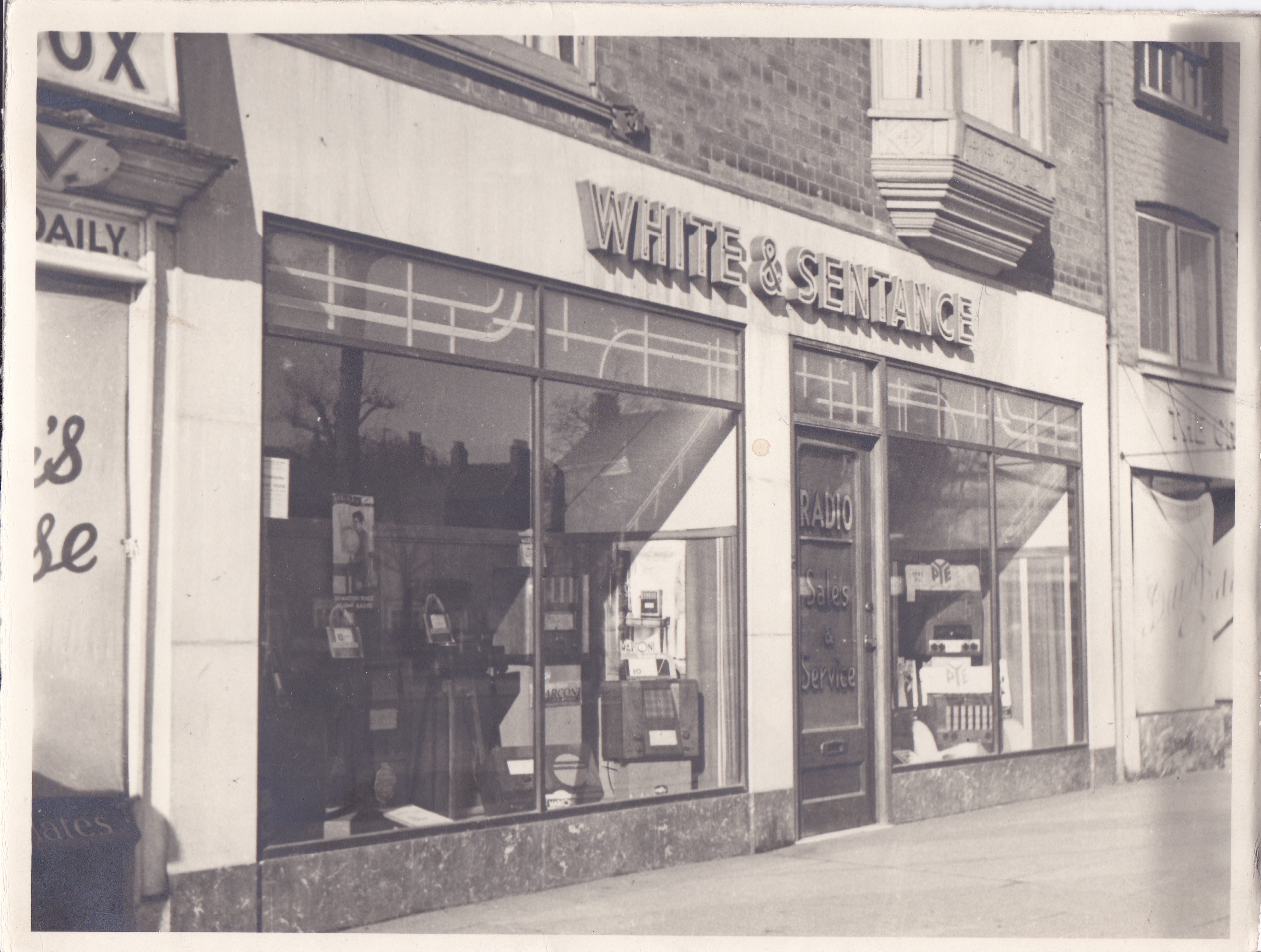 1937 Planning permission was granted for a large first floor piano repair workshop behind the St Peters Hill shop, incorporating an electric piano lift and totalling 1560 sq feet with garaging for 5 vehicles on the ground floor. This workshop served the Grantham and Melton shops.

1954/5 The Melton Mowbray shop was sold to Cramers. From then on the White & Sentance name was no longer used in Melton.

1957 In Grantham the St Peters Hill shop expanded again to now include the adjacent no.26 as well as 27 and 28.

1962-3 The 17 Southgate Sleaford shop was enlarged, almost doubling the display space, with an increased selection of records, guitars and other instruments as well as pianos. 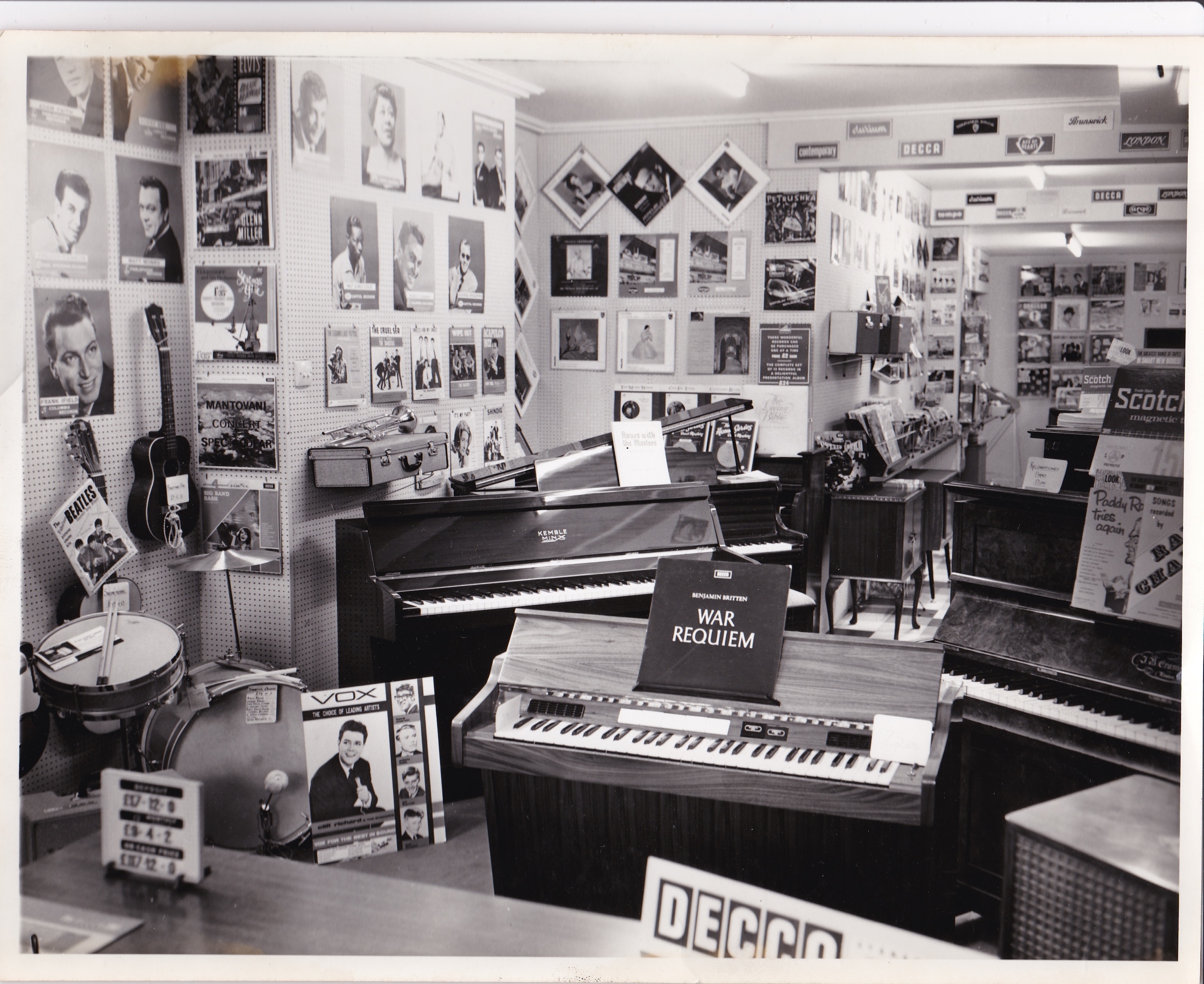 1967 The Southgate Sleaford shop closed, but the piano tuning and restoration business continued from the adjacent workshop at 15c.

1970 The Wharf Road Grantham shop closed soon after the sudden death of Ernest Sentance aged 67. The piano side of the business in Grantham ceased with his death, his brother Guy continuing with records, radio and television sales at St Peters Hill.

1987 4th May. Chris Winter joined Geoffrey Sentance as a partner in the remaining Sleaford business, after working and training with him since school days.

1992 15c Southgate premises partially rebuilt and altered to form a piano showroom for up to 15 pianos.

1995 31st August. The Temple Eastgate Sleaford bought from Baptist Church trustees. The building had been unused for c15 years and a 6 month renovation project started. 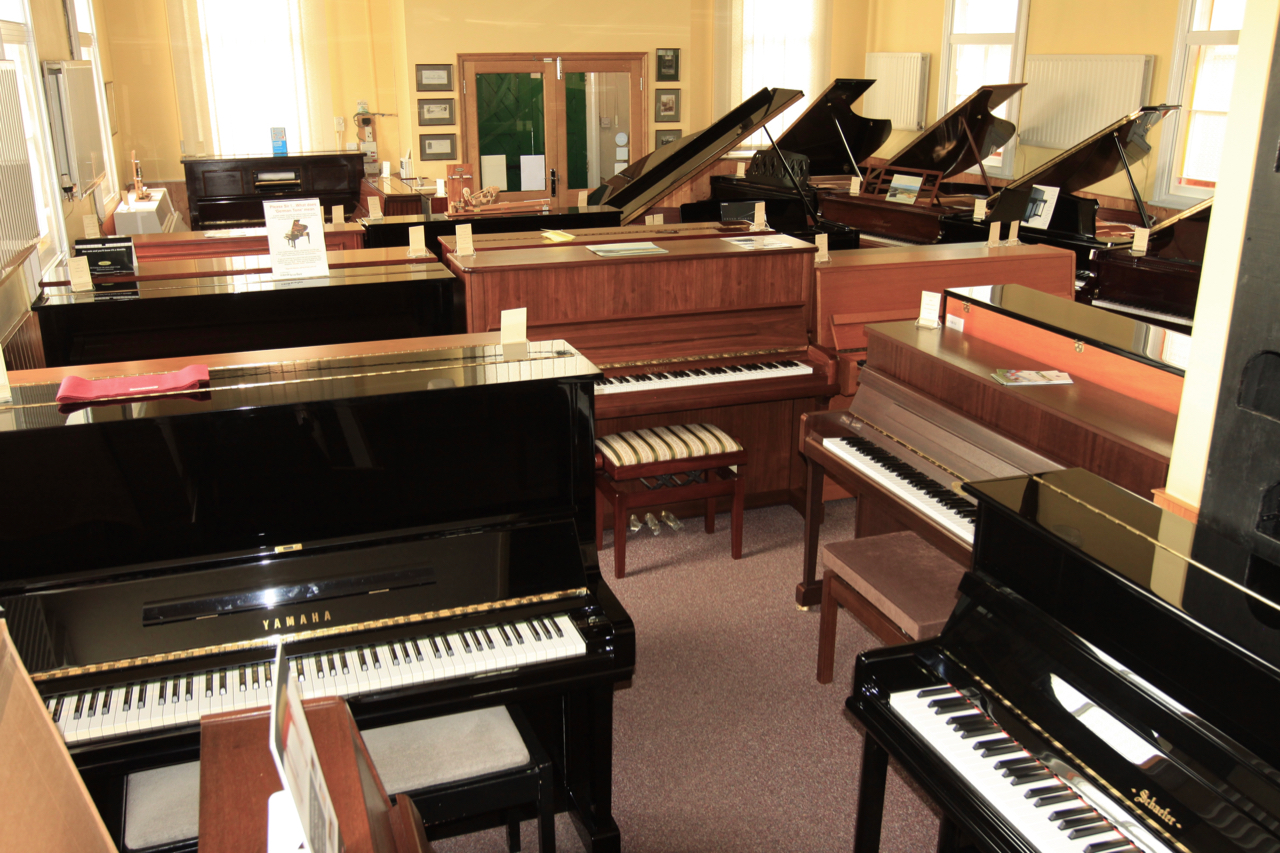 1996 24th March. The business moved into The Temple, with showroom space for c30 pianos and a restoration workshop. At this point Geoffrey Sentance retired at the age of 75.

2011 September. Luke Winter joined the firm, initially part-time to train as a tuner and restorer with his father.

2014 31st March. A company was formed - White & Sentance Ltd - for the piano sales and restoration business. CW and LW are both shareholders, with plans for LWâ€™s share to increase over time.